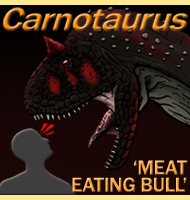 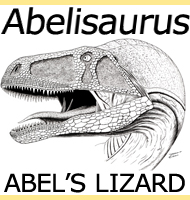 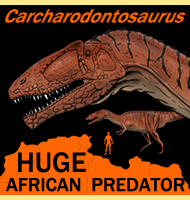 This large abelisaurid roamed ancient Patagonia where it may have competed with other predatory dinosaurs like the contempory carcharodontosaurid Mapusaurus. Skorpiovenator shares the same characteristic short but high skull morphology, and may not have had a large bite force, as has been suggested for some other abelisaurids. Skorpiovenator may have used its deep skull as a 'club', arching its head back and swinging it down onto its prey to drive the teeth home with enough force to do some serious damage to its prey.
Even though some parts of the fore limbs of the original specimen are missing, they would have likely been reduced as they are in other abelisaurids. For those not familiar with the abeilisauridae, or especially the carnotaurinae group, the arms are so disproportionately small that they make the arms of Tyrannosaurus look big!
A note about the name, Skorpiovenator did not exclusively hunt scorpions, it was named as such due to the large amount of scorpions present at the dig site, a reminder that palaeontology starts outdoors in the natural world. The species name S. bustingorryi is in honour of Manuel Bustingorry, who owned the land were Skorpiovenator was discovered.