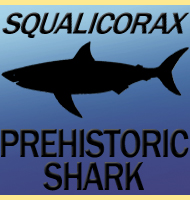 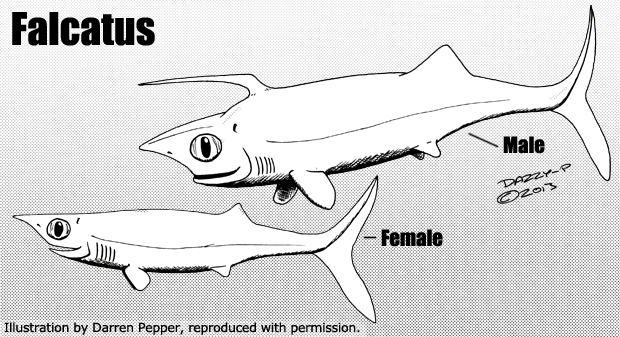 
Falcatus was a tiny shark that has managed to stand out from others because of the presence of a dorsal spine that rises up from where you might expect the first dorsal fin to have been. However instead if rising backwards like in other primitive sharks such as Orthacanthus and Xenacanthus, the dorsal spine of Falcatus bends forwards over its head. The purpose of this curious spine is almost certainly for the purpose of display as it only appears upon the male specimens of Falcatus.
Falcatus has very large eyes for its small size that are probably an adaptation for deep water hunting where less light is available. Also despite the loss of the first dorsal fin that would normally sit above the pectorals, the caudal (tail) fin is strongly developed with both the upper and lower lobes being similar in size to one another. This suggests that Falcatus was an active swimmer that was capable of giving chase after prey, probably smaller fish but possibly also soft bodied invertebrates.