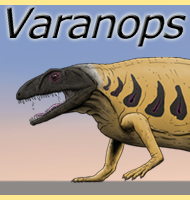 
Although similar to Casea, Cotylorhynchus was considerably larger and at six meters long, represents the largest known caseid pelycosaur. This large size was its best defence against the known predators of the time which were all much smaller than Cotylorhynchus, even the largest example of the fearsome Dimetrodon was still only half its size.
the massive bulk of Cotylorhynchus was not just for defence, it also housed the large digestive organs that were required for getting the maximum amounts of nutrients from the plants that it ate. The great size also allowed for broad shoulders and powerful muscles that it is thought allowed Cotylorhynchus to dig up additional parts like plant roots.
The hands (bearing in mind that Cotylorhynchus was in fact quadrupedal) on the forearms are not only strongly built, they also show a great deal of dexterous control, further indicating that Cotylorhynchus had to dig for additional food to support its large size.
Although the skull looks undersized for such a large animal, it still has large fenestra, especially for the nostrils. This may indicate that Cotylorhynchus had a highly developed sense of smell that in a herbivore would presumably help it find food items that were hidden from sight. Again this points to Cotylorhynchus possibly digging for food items, perhaps in a similar way that pigs and some dogs today are used to sniff out truffles.