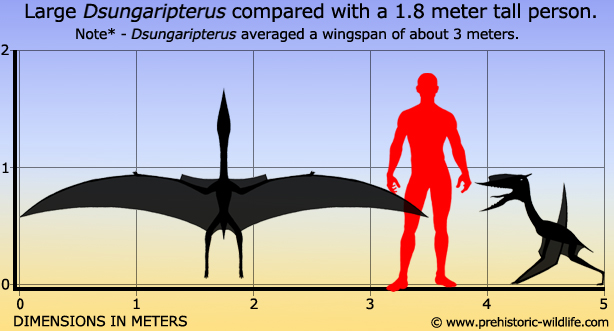 
Pterosaurs that belong to the Dsungaripteridae group are thought to have primarily if not exclusively fed upon shell fish, and adaptations for this diet can be clearly seen in Dsungaripterus itself. The tip of the snout is toothless and curves upwards. This would have been ideal for levering up shellfish that were stuck in the mud, just like if you used a crowbar to lift something. The teeth towards the back of the jaw were blunt, not much use in holding onto a wriggling fish, but very useful for cracking open shells to get at the soft bodied invertebrates therein.
A small crest rose upwards from the snout, starting from where the teeth began in the jaw and ending just above the eyes. A small bony projection also rose from the back of the skull to form a second crest.