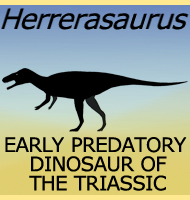 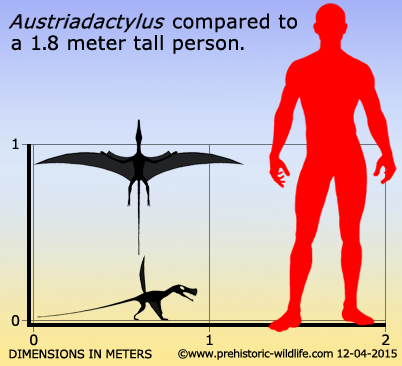 
Austriadactylus was at the larger end of the scale for Triassic pterosaurs,‭ ‬although it was still tiny if you compare it to the much later giants like Quetzalcoatlus that lived towards the end of the Cretaceous.‭ ‬Quite a unique feature for Austriadactylus however is its head crest which rose up two centimetres from the tip of the snout,‭ ‬continuing until just above the eyes.‭ ‬The fact the crest is present is also interesting in itself when you consider that display crests did not become common in pterosaurs until the end of the Jurassic with the appearance of the advanced pterosaurs of the pterodactyloidea.
Only the teeth of the upper jaw are known for Austriadactylus and not only are there possibly over seventy teeth,‭ ‬but they are of different types.‭ ‬The largest teeth were fang like and were presumably for the purpose of prey capture with largest towards the front and smaller versions towards the rear of the mouth.‭ ‬Between these are the more numerous tricuspid teeth.‭ ‬Tricuspid teeth are so called because they have three points and are more suitable for slicing.‭ ‬It is hard to infer a specific prey specialisation for varying teeth like this,‭ ‬but given its large size,‭ ‬Austriadactylus may have focused upon fish or even small terrestrial lizards and amphibian as opposed to insects. The tail of Austriadactylus was still flexible,‭ ‬lacking the stiffening modifications that would be common in their successive descendants,‭ ‬the rhamphorhyncoid pterosaurs.
A second fossil specimen from Italy was assigned to Austriadactylus in‭ ‬2009,‭ ‬although there appears to be several differences between this and the holotype which has led to some questioning its inclusion into the genus.‭ ‬Because of similarities to Eudimorphodon the suggestion has been made that Austriadactylus is synonymous to it.